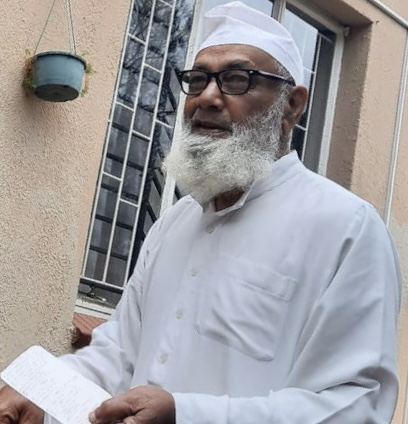 Muhammad Ismail, of Ben Street, Erasmia, said their Malawian maid opened the gate for the thugs.

Another armed robbery, yet another family traumatized and living in fear, but yet again, they are all just another statistic. Yet again police are not answerable for the high crime in the area and yet again the CPF in the area is nowhere to be found, despite the fact that they supposedly represent the community and speak for them, when engaging with police, concerning effective policing in the area. Oh yes, let us not forget the deafening silence of the various political parties who remained in hibernation for five years and then suddenly spring up, when it is election time, making all kinds of false promises, just to woo residents for their votes (and to have biryani at their homes). This time the scene is once again in Erasmia and once again the focus is on a seemingly crooked domestic worker.

In the latest incident of a house robbery that took place this past Tuesday (September 7) at around 9:30 in the morning, a family on Ben Street, in Erasmia, was distraught, after falling victim to a gang of armed robbers. Senior citizen, Muhammad Ismail, explained to the Laudium Sun, “As normal, I left home at around 7:00am to go to work. We have a maid who comes to work at 7:15am. My wife (70) and my granddaughter (18), were in the house at the time, as my daughter went out to the shops to get a few things. It was around 9:40am, when three guys stormed into our house. My wife was in her room. Suddenly one guy came in front of her as she was on the phone with my daughter, who lives on Bart Joubert Street. The guy pointed a gun at her and the other guy went to the room where my granddaughter was, and also pointed a gun at her and then pulled her to the room where my wife was. The third guy, remained in the dining room near the front door. I think he was watching if anyone was coming in. The two thugs demanded that my wife give them money and jewelry and threatened to shoot her and my grand-daughter. My wife explained to them that we do not have much money nor do we keep money at home, other than petty cash to buy small items such as bread and milk, but they did not believe her. After she gave them about R300 she had and my grand-daughter gave them the R400 she had, which she was supposed to use to pay for tuition, they then tried to cover my wife with a cloth, but my granddaughter pleaded with them not to do so, as she was old and would not be able to breath. They then left her, but whilst the one guy was keeping watch on them the other ransacked the cupboards and threw everything out.” Meanwhile my daughter, whom my wife was talking to at the time the robbers entered, could hear everything as my wife had not put the phone down. So she called for help and also sent her two sons to come and assist. Muhammad explained further the events of that horrific day which his wife and grand- daughter revealed to him, “Then our maid (Grace), from Malawi, who was with the gang, as she is the one who opened the front gate and the door for them to come in, took our TV, and was planning to put it in a box, but dropped it in the dining room, after seeing the car of my grandsons approaching. But, when my grand-sons came in, the one thug, who was hiding behind the door in the dining room, put a gun on the one’s head and grabbed his phone and then stabbed the other son and also took his phone. The maid quickly ran out to the next-door house and told them that there were robbers in our house and that she was scared and then she disappeared. The gang also snatched the phones of my wife and granddaughter. They also stole jewellery and my watches. They then took some documents which included my wife’s Covid vaccination card and our hospital cards. The gang then put all the valuables in a bag and left from the back wall. My grandson had to receive 7 stiches due to the stabbing. This is very hurtful and traumatic for all of us and a huge set-back for us. What kind of life are we bringing our grandchildren up, in this country? What future do they have here? Unfortunately we did not have any details of the domestic worker, all we know that she is a Malawian as she was working for us for just four months. Although she told us that she did not have a passport, we still hired her without even taking her photo, as she was recommended by someone we trusted a lot and who worked for us for more than a year. We did not think that she would do such a horrible thing. When we wanted to open a case, the police said because the items that were taken were likely unrecoverable, we must not waste time, because they will have to check everything in the room and take fingerprints, which is a long process. They suggested that we should rather do an affidavit, so that we can get new hospital cards.”

Constable Tumisang Moloto, of the Erasmia Police said, “It is not for the police to say to the victim not to open a case. The resident must open a case regardless of how small the items stolen are. The resident should file a complaint against the police and we will follow it up.”

*The Laudium Sun once more appeals to residents to ensure that they have the latest photos, copies of ID’s and even finger prints of all domestic workers they employ and to make sure that the copies are not kept at home, but rather at some other place, known to family members living elsewhere, as many domestics search the home for these copies, after attacking.