Prayers for the speedy recovery of Amoo, after being shot by greedy thugs… 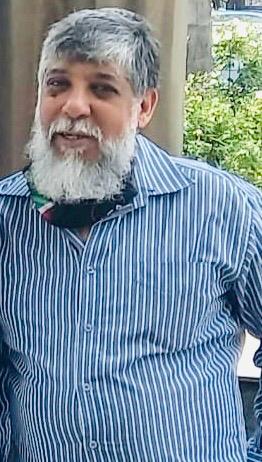 The new year has certainly started on a very sombre note for local residents, with crime and more crime news surfacing, since the start of 2022.

In one of the most heartfelt and disturbing incidents of crime reported in the first week of the new year, local residents were shocked to learn of the shooting of a businessman from Bengal Street, who was shot by armed thugs at his business on Boom Street in Marabastad. Social media was abuzz (see Laudium Sun FB page), last Thursday (Jan 6) when news went viral of the shooting of Ahmed Rashid Carrim (Amoo). Amoo, who is described by many as a simple but caring and helpful person, is involved in many community based organizations, assisting the poor and destitute. He also heads the ‘Durood Naria Group’, (founded by his late father, Hajee Moosa), which holds regular prayers for those who
have health problems and those in distress.

According to a family friend, four armed thugs entered Amoo’s shop, Boom Street Wholesalers, just before closing time, last Thursday (Jan 6). The business is normally busy during this time of the year, as it specializes in school uniforms. Amoo was at his shop at the time, together with his wife, a staff member and a customer. It is believed that the thugs pointed guns at them and threatened to shoot them, if anyone screamed. The thugs then demanded that Amoo hand over all the business takings and that everyone hand over their cellphones. Amoo remained calm and immediately obliged to the thugs’ demands, handing over his cellphone and all the cash for the day. However, one of the thugs then started to search the customer in the shop and took the little money that he had left on him for transport. Amoo is then believed to have pleaded with the thug to leave the customer alone. That is when one of the thugs dragged Amoo to the front of the shop, shot him point blank in his stomach, after which the gang then fled. Amoo was rushed to Steve Biko Hospital in a serious condition. According to a family member, Amoo is now on a ventilator, as he is having breathing problems. The gun shot apparently damaged his colon and intestine.

A close friend of Amoo, Samed Gutta said, “The news of the shooting of Amoo has been very depressing. Why did the criminals have to shoot him after he gave the money? These thugs are too heartless. Amoo has been giving his time for the benefit of the community and has been involved for years in praying for those who are ill through the regular Durood Naria Khatams he holds. It is now our turn as a community, to pray for his full recovery”.

Shahima Yunus said, “Uncle Amoo is a man who always puts the interest of others first. A man who will see to those who need help at any time of the day or night. A man you can count on always. Our prayers are with him and his family. May the Almighty grant Amoo complete shifa (recovery of health)”.

Premilla Archary said, “We pray for peace in this country. May Amoo recover fully and may his loved ones have strength”.

Misbah Sheikh said, “The crime rate in our country is disastrous… obviously since the police are doing nothing. May the Almighty grant safety and shifa to all those suffering”.

Shaheen Wahab said, “This lawlessness in SA… May the Almighty grant Amoo complete shifa and a speedy recovery.”